See and Be Scene 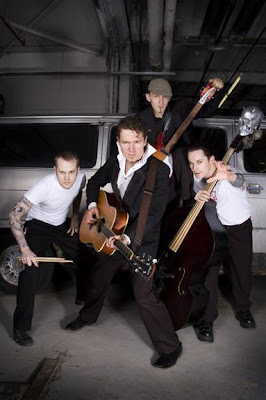 Checked out the music scene again a couple of weekends ago. London, Ontario has a great indie band scene and Michael has been a willing partner in exploring new bands and different genres of music. Using the Scene Magazine I chose the Trole Brothers who were playing at the Black Shire pub. They were described as playing rockabilly punk which I figured was a fusion of two types of music I have always loved.


We arrived at the Black Shire around 11pm and paid a $5.00 cover charge to get into the upstairs space where the band (duo) was playing. We missed the first set but enjoyed two more rowdy, very entertaining sets that wiped away any hesitations I had when first seeing only two wee band members squeezed into a small corner of an already small room - looked like a pretty shabby and amateur operation at first glimpse.


When they started to play we were blown away by the obviously stellar musicianship of the two Trole brothers and the uptempo rockabilly arrangements of some classic rock, blues and country songs. They also played some of their own original tunes which you can listen to on their MySpace page . It looks like the band broke up back in 2008 as they used to have an upright bass player and a drummer - now its just the two brothers - J. Trole Taylor(lead singer and rhythm guitarist) and J.H. Taylor (aka The Fiddly Bit Kid) on lead guitar and vocals.


These two guys had so much raw energy and talent and an obvious core of very devoted fans judging by the small group around us that they had no trouble at all creating an electric atmosphere and winning over two more fans - US! After watching some of their youtube videos however, I really wish I had experienced their full band - it looks like they put on quite a show.
I also wished I had purchased their CD so I hope they play around London again some time soon!