I Love my Deck! Now if it Would only STOP raining!

I'm a little naive when it comes to building projects - I had no idea cement would be involved in the making of my new deck.
I also didn't realize that my old cement steps in front of my patio doors would get
broken into a bunch of pieces and tossed away. But I am just fine with that. Over
the years many animal families (skunks, chipmunks, raccoons!) have lived in the hollow
area behind the cement steps. I'm not  going to miss them! 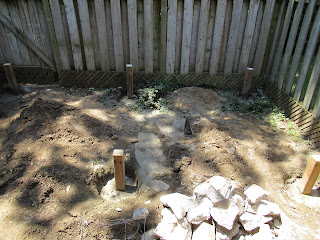 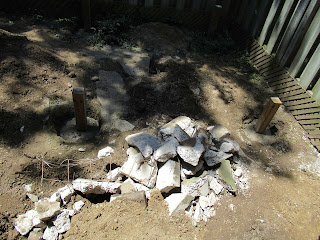 Wasn't he a tidy worker? After each step of construction he would clear up the
area he'd been working in. Of course it was not a very big area so I suppose
he had to clear up to make room. 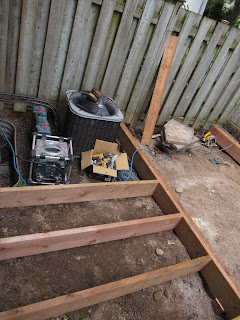 He thought my plan of maximizing the space made sense so he worked around the A/C but every other square inch went to the deck.  The floor was raised by 8" so that the deck would meet the bottom of the fence. And a lot of old materials - flagstones, smaller bits of broken up concrete, stones and rocks were buried beneath the deck. 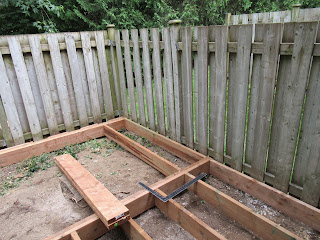 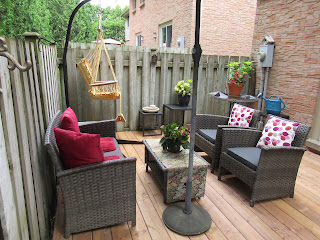 I need to take more photos as I've bought a couple other chairs, a new lantern, new table cloth
etc. As it's currently sprinkling that won't be today...but soon. 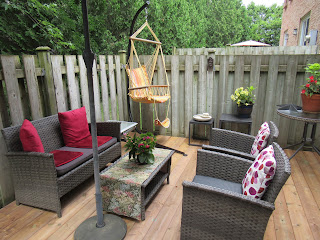 Some of you may recognize my hanging chair - I had it at my trailer hanging from a tree and also
in PEI on a tree. I hung onto it in the hopes of using it again someday - and found out a month
or two ago that there are stands you can buy to hang the chair from!
So happy!
It's now my favourite reading spot :)
Doesn't it look great? 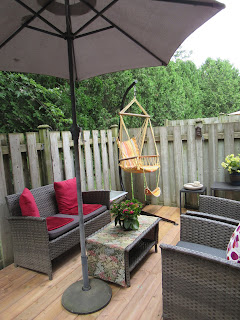 We've had a LOT of WEATHER lately, if you know what I mean...pretty much everything
you can think of except for snow...and that wouldn't surprise me much. Even tornado warnings.
It's been very unsettled with lots of events being cancelled unfortunately.
I haven't been hiking around Fanshawe Lake as much - just once this week - instead I've switched to my bike as I can't escape the bugs when I'm hiking but I'm a blur on my bike! ZOOM!

Have you noticed the infestations of bugs lately in the news?
Las Vegas is full of grasshoppers, Orillia and North Bay (in Ontario) had literally billions
of shad flies descend upon them! 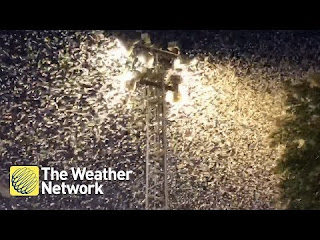 UGH!
The major news story at the moment in Canada is about the two teenage boys who are wanted in connection with three murders in British Columbia. They are on the run and were last seen in Northern Manitoba. This sort of thing doesn't happen too often here so the whole country is
caught up in this awful event. Hope they are found soon!

Keep cool everyone!
It's my favourite day of the year - The PRIDE Parade!!
Written by Jane at 8:08:00 AM 11 comments: Links to this post

The Deck has Begun!

This is the way the deck used to look - pretty grim.
Nothing but clover and weeds would grow between the flagstones.
Nothing like sitting outside, reading a good book, surrounded by dirt. 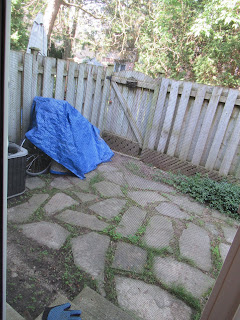 Oh, and a small patch of myrtle which Lily
used to bury herself in.
Sorry Lily. You'll have to make do with potted plants! 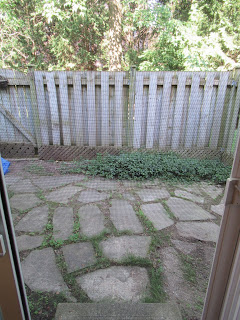 The deck guy spent yesterday measuring and making
giant post holes. Not sure what he is working on at present though I can hear a
lot of whacking! I'm afraid to look! A big pile of wood was just delivered.
Hurrah! Progress! 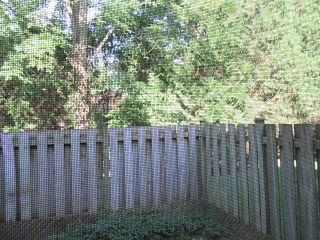 Oh thank goodness....COLOUR! Saw these gorgeous fuchsia coloured
flowers on my most recent trek around Fanshawe Lake.
Wild Sweet William?
A feast for the eyes! 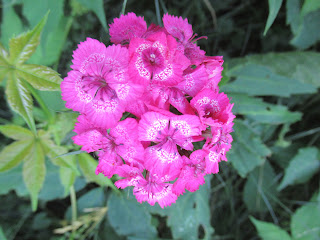 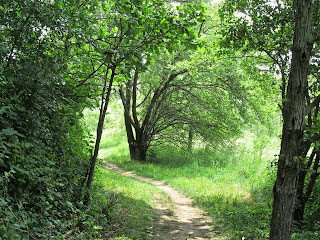 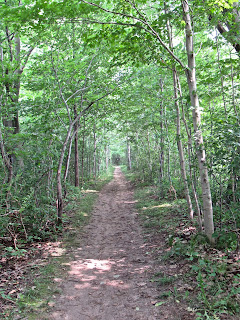 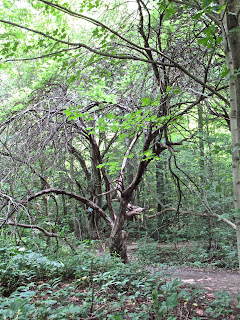 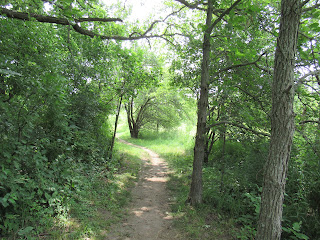 Hope you're enjoying summer now that it is finally here. Around here we had a cold wet spring - it wasn't nice AT ALL and then it instantly became summer complete with blisteringly hot days and hot sticky nights. But I'm not complaining! I look forward to sitting on my deck soon (hope he's a fast worker) shaded by my huge maple trees...cool drink to hand....mystery novel to hand (because I have two hands!) and hopefully a nice breeze.