From the serious to the mundane...

Wow - that crowd in Washington D.C. was HUGE...might I say even bigger than someone's "inauguration" last year?!? I was proud to join with fellow members of "People for Peace" and the "Council of Canadians" here in London, ON. on Saturday, March 24th in support of proposed new gun legislation driven by the youth of America, especially those who have experienced gun violence first hand in their schools and communities. I couldn't be any prouder of those kids than if they were my own.

Here, in Canada, we are faced with rather less serious issues but issues that still relate to the leader of our country - Justin Trudeau. We are floundering with the issue (and I do mean FLOUNDERING!!) of gender language, yes, that's right - our headlines and political cartoons provide some comic relief which I suppose is dearly needed these days...

Perhaps you heard about this one...Justin ending "mankind" as we know it...interrupting a woman who used the word "mankind" during one of his cross country town hall meetings... 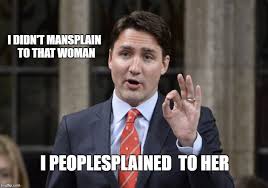 ...and my personal favourite...Service Canada employees told not to use the terms "father" and "mother" anymore but the more gender neutral (and CONFUSING) terms "Parent 1" and "Parent 2"... I guess in my case as a single parent my Service Canada rep should call me "Parent 1 AND Parent 2!"

Or people can choose a term they feel most comfortable with..... 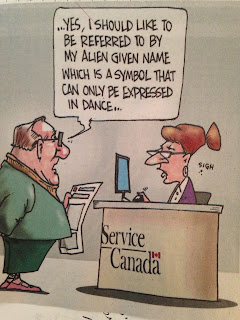 Not satisfied with the neutralization of our language Justin is well on his way to permanent ridicule by some of his outfit choices...causing his constituents great embarrassment!

During a failed trip to India... no government officials showed up to formally greet him and his poor family...no one except a soberly dressed Bollywood star! 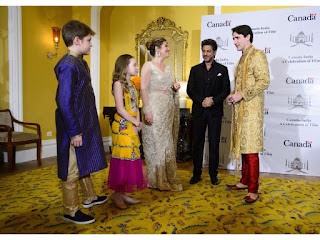 A future trip to Germany? 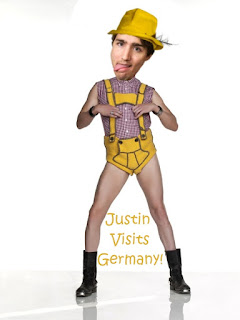 It's not all bad however; Justin is very sincere in his fight for equality - for women, for people of all ethnic groups, religions and sexual orientations...just reign in the ridiculousness a notch or two...PLEASE!!

He does enjoy a good party...seen here at a PRIDE parade...and I admire him for that - no other Prime Minister has gotten past the awkwardness so joyfully as Justin has...(just put away that Miley Cyrus tongue!!) 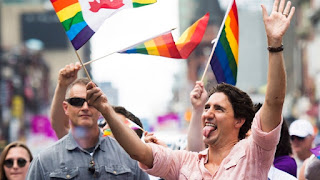 And no other Prime Minister has done THIS!! 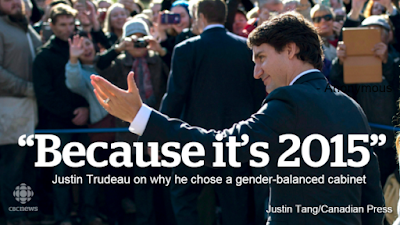 So, as always with our leaders, we have to accept the bad with the good....or do we??? I think the next generation of voters is going to have a BIG SAY about that!! 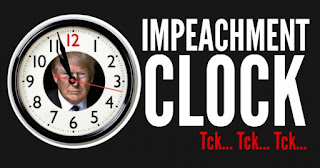 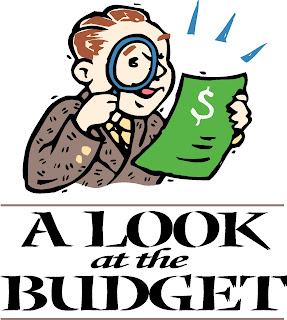 Money-wise this has been a March like no other. Thankfully in a good way (mostly....) Somewhere along the way I made a $300 mistake in my budget...in my favour!! How often does that happen? Usually never right? Occasionally I make an error in adding or subtracting on my budget sheet and of those errors about 98% of them are NOT in my favour! Most times the mistake is under $50, usually less than that. Am I looking to figure out how I made the $300 mistake? Ummmmm NO! - I'm crossing my fingers I can get to the end of March with that error intact! Counting the days....

Between that $300 and my misc budget line I have almost enough to pay for 3 weeks of airbnbs in Scotland! No money taken out of savings! My goal was to spend no more than $1,000 (Cdn) for the 21 nights with my brother contributing the same amount. The final tally came to $818 (Cdn) each - EXCELLENT! (Works out to just under $40/night/person!!) I'd call that "extra spending money" except that the British pound is going up up up while the Cdn dollar is going down down down. The savings on accommodations will hopefully cover the extra we'll have to pay to buy British pounds (or poonds as the Scottish say...)

So all is booked and confirmed. Though I had mega-problems with my President's Choice Mastercard. After booking several airbnbs my mastercard was frozen due to my making transactions out of my usual pattern. Okay then, I let them know I had a few more to book so this wouldn't happen again. Well, it did, after one more successful booking my account was frozen once again. Another lengthy ordeal on the phone..."there are 23 people on hold ahead of you....." all I can say is thank goodness for Paypal which I used instead! Sorted once again I assumed my problems were over. I filled in a "travel alert" so they would know when I was travelling and act accordingly.

On Thursday I met with my brother once again as we needed to book a night near Stirling and 3 nights in Glasgow. Guess what? You guessed it! Account froze again. Well when I finally got a REAL person I went up one side of them and down the other. I'm usually very mild-mannered but this was just TOO MUCH!! After getting sorted for the 3rd time they apologized and offered me 20 President's Choice points to make me feel better - I don't think he liked it when I laughed loudly and said "don't bother - you know that's only 20 cents right??"

So here's the thing - I think I need to switch to another credit card. I received NO notifications by phone, email or text about so-called suspicious activity. (You know the messages I mean - an unusual charge just happened with your credit card - if it was you please ignore this message, if it wasn't you please call immediately!) He couldn't believe that I hadn't received any such contact and did a search only to find I was right.  Stupid stupid man...

Have you ever encountered this problem? What am I doing wrong? Any recommended credit cards (remembering I live in Canad...) Grrrrrrrrr! The thought of having to switch cards irks me to no end! 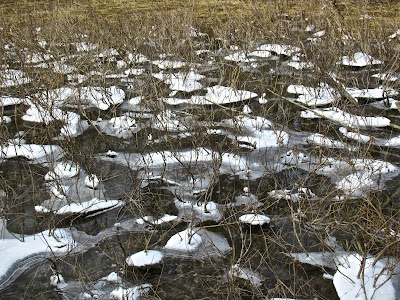 After my daffodils popped up their heads we had a fair bit of snow and it got very cold again. I think they died as I don't see them now that the snow melted. Rats... 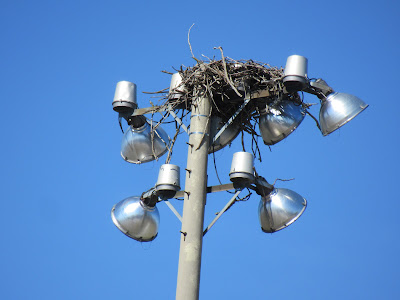 I've been checking almost daily but no activity in the nest yet. I thought I saw an osprey flying very high yesterday (I could see the wing shape) but it didn't go near the nest while I was looking. Soon!

I hate losing an hour. But I do like seeing the sun shine past 7pm - that was a treat yesterday. My daughter thinks spring is just around the corner..... if by corner she means the end of March then she could be right!! Until then we have lots of snow still in our forecast though on the bright side it'll likely melt quickly.

After going to our doctor, then sitting in emerg for 6 hours followed by another visit to our doctor Kazi was finally put on a round of antibiotics. She has been sick pretty much continuously since the Olympics started in February: extreme sore throat, body pain, fever, headache, congestion, cough etc. It has been a long hard slog but after taking 3 pills (not all at once!) she started feeling like her old self again. Or should I say young self. She missed a lot of work - first full days and recently half days BUT today marks her first full-time day at work in several weeks. What a flu season this year!! I really hope she's past it all now.
Not a lot else going on around here - I've been on nurse duty all of this time and beside trips to the grocery store for SOFT food (yogurt, jello, broth, applesauce, popsicles etc) I haven't been doing a heck of a lot. When the weather has cooperated I've gone for long walks and went to my volleyball games. Last Thursday and Friday I spent mostly with my brother booking Airbnbs in Scotland which is quite the exercise in patience - accommodations are not easy to find in the highlands and we spent hours and hours searching and booking. We're pretty much set except for finding a spot in Glasgow for the final 3 or 4 days. 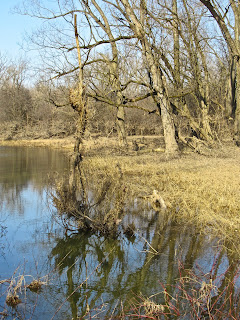 So what to do with my freedom today? Well I think I'll head to Kilally Meadows after doing my yoga. The sun isn't shining but I want to check the Osprey nest. They are due back by the end of this month though I've never personally seen them in March. But I won't see them if I don't check! I also want to see if all of the flooding has receded. When I was there last week most trails, maybe 75%, were no longer under water but the MUD - oh my!

Enjoy your day! Hope the sun is shining where you are. We are only 8 days away from the official first day of Spring!! Wheeeee!

We had a gorgeous day to march for International Women's Day! Here I am in Victoria Park with my friend Jules prior to the march. There were a number of speakers telling their stories - it was quite emotional. One woman who spoke is currently engaged in a sexual harassment case against the principal of the school she used to teach at. A fierce woman spoke out about her murdered best friend and how the police were extremely slow to respond due to the line of work she was engaged in. It was a complete travesty and just another of the endless horrific incidents in which women's rights are neglected, ignored trampled on and discriminated against!! It sickens me to my core... 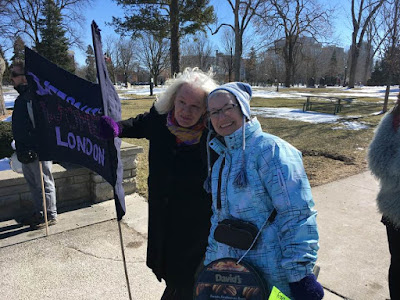 Here we are taking over the streets of downtown London - a great turnout!!  My sign relates to the number of years I worked for The Royal Bank of Canada beside men doing the same jobs for more (much more) money than I earned. That's just the way it was and we lived with it. 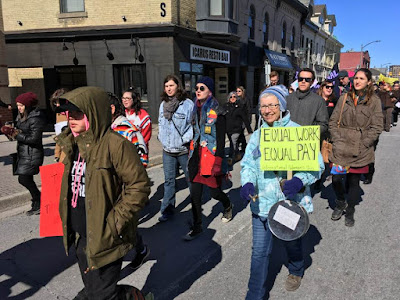 Unfortunately I got a parking ticket, how ironic! They get it from you one way or another! I am disputing it so we'll see what happens.  And even more unfortunately when I got home Kazi looked like she was on her death bed. After 5 hours in emerg it seems you can get the flu more than once because of the various strains this year. Oh joy! So another round of chicken broth, jello and popsicles. I am washing my hands so much I'm running out of hand lotion! Too bad the Olympics didn't last a couple more weeks...as it is she's watching every episode of "Friends" for about the 3rd time :) I'm keeping my distance...her symptoms are even worse this time around!

I sincerely hope y'all are feeling healthy!!
Written by Jane at 12:15:00 PM No comments: Links to this post