Things are Moving Along

Well it's a busy time of year in the land of birds and plants! And for us humans too as the warm weather means all the crap that was under the snow is now plain to see. I've raked and swept several times as the trees are loaded with buds that fall off the trees a bit at a time. Although I live in a condo complex the area is well treed with locusts, maples, cedars, spruce etc etc. When I first bought the place in 1994 the maples were little saplings - now at 80' tall they loom over the house providing lots of shade. I don't mind shade in the summer as I rarely have to use my A/C but all the sun-loving perennials I planted years ago of course didn't survive. Ah well, life changes frequently doesn't it?

I've been busy over at Kilally Meadows (I sometimes think I should change the name of my blog to Kilally Meadows as I practically live there!) I spotted a merlin on Sunday - that's a new raptor for me though while I can stand seeing ospreys with fish in their claws I do NOT want to watch the merlins ripping small birds apart! Ugh!

Speaking of birds I had a fun encounter with a starling the other day - as my guidebook says they are very gregarious and while this one hopped around a bit it came quite close and I snapped a few good photos that are actually in focus for a change! Her beak was yellow which means she is breeding and boy she was sure happy about it! 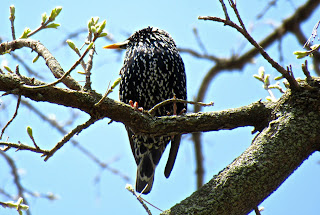 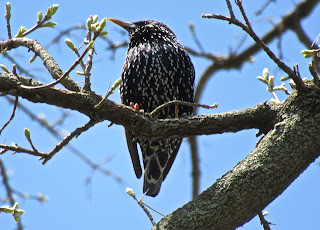 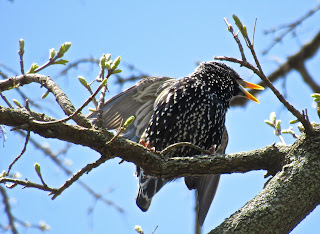 The meadows were flooded here and there after all the rain we had and I had to turn around at one point due to the trail being underwater. Not nearly so bad as last year though. I took my chances when out on my bike Monday cycling through a few flooded areas. I figured I'd be reckless as an elderly Japanese man told me it would only be up to my ankles - he was right though my socks got wet and that felt rather unpleasant! :( 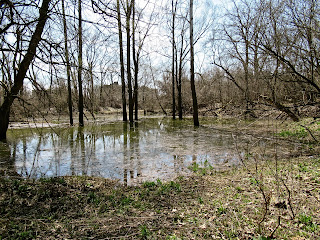 Due to the flooding the marsh marigolds were blooming in places where they've never been seen (by me) before - I guess that is how plants spread and take over new environments. 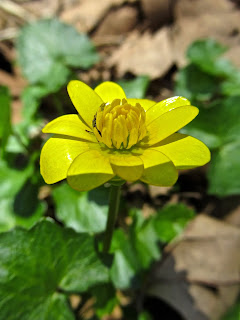 I've  contacted a company to see how much it would cost to put a deck platform on my patio. I've tried several times to grow grass with no luck.  So much stuff falls from the trees that I've swept out all the tiny gravel (pea gravel?) between the flagstones and there's just no dirt for the grass to hold onto. My patio water source is at my next door neighbour's house (my hose it at the front of my house) and her tap leaks so I've given up asking her to use her hose. Anyways...I think a deck will be really useful - you should see me try to find a reasonably flat spot to park my chairs and other outdoor furniture - due to the flagstones everything wibble wobbles!

After that gets done I'm thinking about getting Bathfitters in - they put in a new shower surround and new bathtub and give a lifetime guarantee. Should have done it years ago haha! I'm also working on spring cleaning though I noticed the dining room window is speckled again due to recent heavy rains. Drat. Spring cleaning is going to turn into summer cleaning and then fall cleaning...

I hope you're all doing well and in fine fettle with spring in the air finally. I open my doors and windows every chance I get to bring the fresh air inside. Sure perks a person up. Volleyball ends this Friday with an all-day tournament and then my routine will change a bit as I'll have more time for myself and will hike and cycle ending up at DQ afterwards :) (I did that on Monday already!!!)

Ok, time to think about supper. There...I've thought about it HAH!

Thanks go out to my readers for recent uplifting comments.
I feel inspired to carry on and start posting again.
It feels wonderful to know
that although we don't talk face to face
(well, thankfully sometimes some of us do)
you are in my corner
and I am in yours.
Some of us have been posting and
commenting in the same family
of blogs for 8-10 years!
I think that's amazing and
I just want to say...
"I love you guys"!
This is a remark some of my family members,
including me,
make when we've tippled one too many
scotches :)
we get sappy and teary
but in a good way.
😁 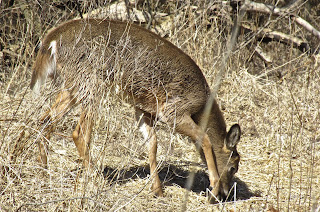 Hello my friends. Thank you for the enquiries regarding my daughter. We hit a bit of a low point over the past couple of months and it's been hard to put pen to paper...so to speak. But we are very hopeful that the recent procedure she had done will put paid to pesky abnormal cells and she'll be enjoying full health soon. Well, soonish.

The procedure she had done is called LEEP which can be googled if you want the gory details. The doctor told her after it was performed that it had a 90% success rate so that is where the hopefulness comes in. She still has a year of continuous pap tests to go through before she will be declared free and clear. Every 3 months she'll have a pap test until such time as she has 4 clear tests in a row. Then she'll go to once a year.

Kazi is also doing battle with anxiety and depression resulting in going on short term disability. This has been a difficult struggle as resources around here, such as seeing qualified psychologists and therapists, are in such high demand these days as a whole generation of millennials try to get by on low-paying multiple jobs, many part-time and without benefits and without a hope in hell of ever owning a home or building up savings.

In other, happier news.... SPRING is on its way and we are enjoying a few warm and sunny days with lots of rain and a few snowflakes mixed in. I am doing a minimum of 20 minutes daily in nature to keep my own mood positive. This is my favourite time of year with the ospreys and other birds returning to my favourite spot, Kilally Meadows, along with many wildflowers and flowering trees. Just to keep my feet firmly planted I've started spring cleaning :) just for fun! I started with my dining room as it's an easy room to clean and hopefully by next spring I will have made it through the whole house!

I hope you are all doing well! My plan is to return soon to more frequent posting. Volleyball ends April 26 and I am looking forward to having more time on my hands for writing, genealogy and of course CYCLING! 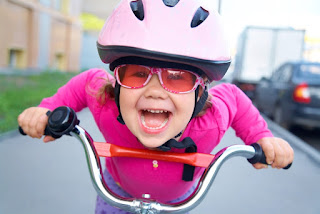 Thanks for always being there, I appreciate it so much.
Written by Jane at 8:52:00 AM 11 comments: Links to this post