Life has been pretty hectic lately and I don't do "hectic" very well.  However, I've made it through intact and life is looking up.

Before I get into details I want to post a pic: 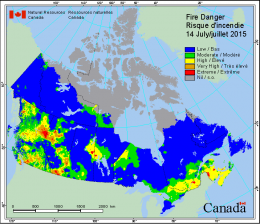 Val asked a while ago if I was being affected at all by the raging forest fires in Canada and I can reassure you all at this point that NO I am nowhere near the problem areas. This year there have been upwards of 800+ separate fires happening at once. Firefighters have come from as far as Australia and soldiers are also being trained to help in the fight.

I live in the small blue triangle that is surrounded by the Great Lakes though I see on this recent map that there are moderate to high risks to the north of us. Drought conditions in British Columbia have made the situation very difficult this summer with cities in B.C., the western provinces and some northern states being subjected to heavy smoke. Around 13,000 people have been evacuated from their homes so far just in northern Saskatchewan alone.

Fortunately I read today that storms are predicted which will help put out some fires but the lightning may cause more fires to occur. I read one report that suggested some fires could be burning until it SNOWS!!

Following are some pics from my Class of '75 high school reunion which occurred over the past weekend here in London:


Some of us met for dinner Friday night at a pub called The Morrissey House where we reminisced about all of our old high school teachers and every party we ever attended during our high school years (too many to count!)

Then the next day more classmates & spouses met up in Victoria Park to enjoy Sunfest - a 4 day event with musicians from around the world and lots of ethnic foods to enjoy. In the first photo I'm standing between my cousin Murray and his wife Debra who drove up from North Carolina! Here we got caught up on each other's kids and what they were up to (or NOT up to as the case may be!) 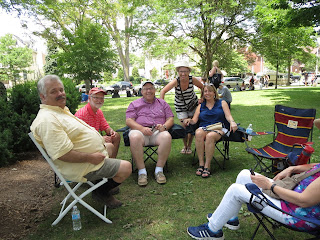 Once everyone had arrived we moved the party over the the beer garden! Here we shared information on classmates who didn't/couldn't attend the reunion; a sort of "where are they now? 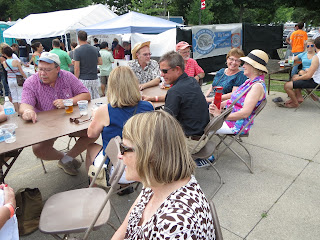 In between good friends Martha and Josie. 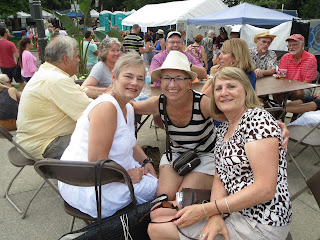 We paused for a bit to shower and change and then gathered once again to have a fabulous dinner at The Keg. More rehashing of past adventures and funny moments at school, various camping trips etc.
My cousin Murray and I. 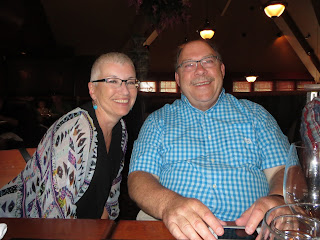 Here we are deciding what to eat and drink-such a nice happy bunch! 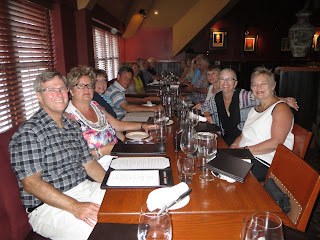 This weekend was all about eating, drinking and catching up. These are the people in my life that years can pass in between meeting up but we just pick up where we left off. We're looking ahead at possibly having a HUGE 60th birthday next year!

These last two pictures were taken at the Delta Arms Hotel where we had an amazing brunch... 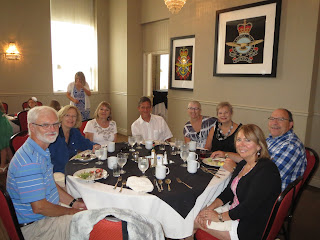 ...complete with a chocolate fountain.... 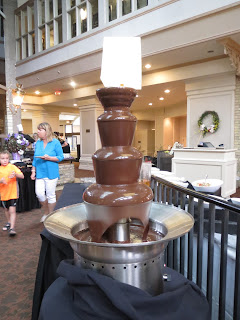 which went REALLY well with my DEEP FRIED CHEESECAKE!! Oh my!!

It was a great weekend, very busy. The weather cooperated, thankfully, as I didn't have a Plan B if we got rained out. But all went very well and I can't wait to do it again but with SOMEONE ELSE planning the next one!