Making Your Own Firepit

As I sit here by the fake fireplace at Starbucks my thoughts turn to Crofters Lane and the firepit Michael built there in August.  The house wasn't "officially" ours yet but the owners allowed us to "camp out" in the house until we signed papers at the lawyers in a few days. Michael had some very definite ideas about what he wanted to accomplish during the week we spent at our new home - first was the firepit, then he wanted to transplant some spruce seedlings from our forest to build a wind break to the north of the house.
It was an interesting week - we had a small bar fridge and ate a LOT of sandwiches. We had an old table in the diningroom and a couple of mismatched chairs. Upstairs we had a king-sized air mattress, some towels and toiletries. Although the owner loaned us a TV we had brought our own source of entertainment - a six-inch black and white TV with AM/FM radio. We found K-Rock 105.5 and turned it up high. This was one place where we'd be able to play our music as loud as we wanted to!
And then, Michael got busy! 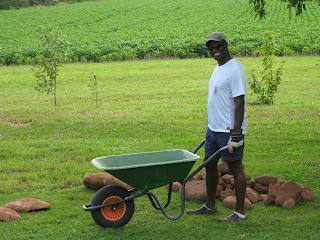 We used rocks from our driveway which had recently been levelled. There were literally hundreds of rocks in the culverts on each side of our .4km driveway to choose from and Michael spent a good while hauling them up in a wheelbarrow.  He picked the perfect spot for the pit and started digging. 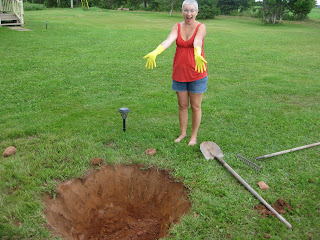 We didn't have a lot of tools but we had enough. Michael worked up a good sweat digging the firepit hole in the distinctive red PEI soil. Me - I was cleaning all of the woodwork inside...hence the yellow rubber gloves:) 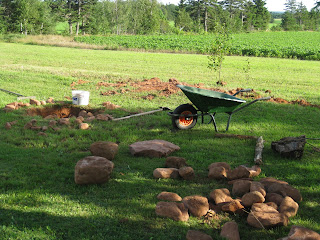 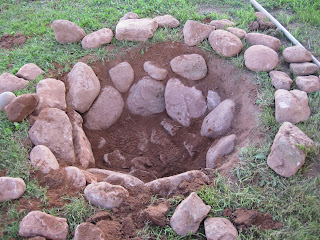 A spot was carefully dug for each rock and each rock chosen for its particular shape and size. Nothing left to chance.  Gradually the firepit began to take shape. 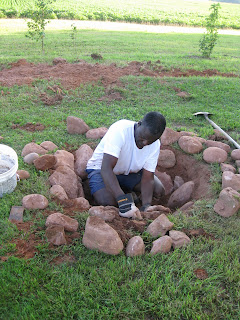 Michael really gets "into" his work:) However, I would suggest that next time he pick a different coloured T-shirt...perhaps reddish brown?? 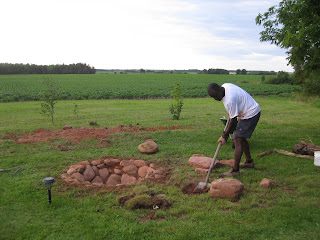 Certain flat stones were chosen to be "set in" for seating or as small tables for holding candles and/or drinks:)﻿ 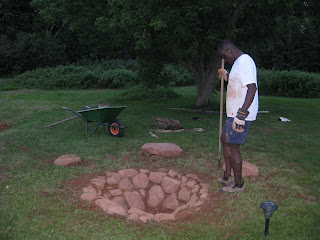 Looking good Michael but I think it's starting to get dark! The sun is starting to dip down behind the forest. 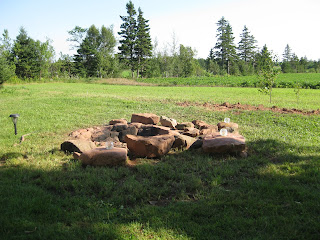 Let's put out some candles - it gets REALLY dark around here at night - it's nothing like the city!! 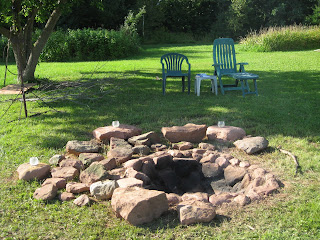 Michael brought up a lot of extra rocks - he's thinking about expanding the "lip" of the firepit, or he might save them for another DIY project. 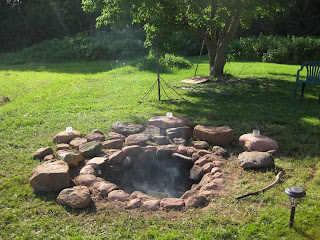 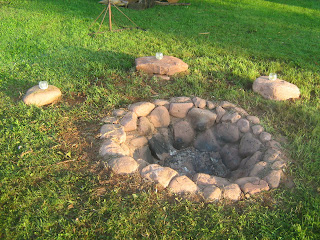 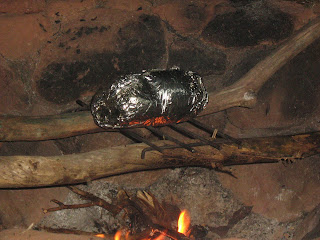 And this is how you cook when you don't have a stove or a BBQ! A couple of good sturdy sticks long enough to reach across the top of the firepit and a small metal rack to hold our food.
There's a well-seasoned chicken inside that foil - we felt a bit like pioneers:)
Except I don't suppose they had tinfoil.
It was scrumptious! 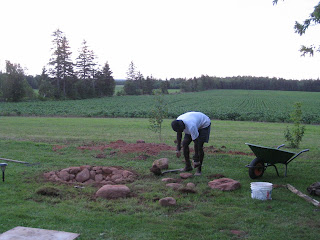 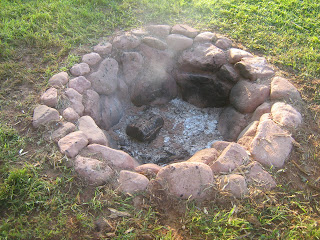 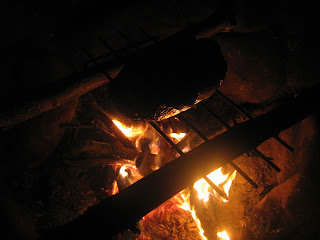 Functional AND mesmermizing!
We burned up a lot of stuff - two musty old dressers that were left behind, we broke them into pieces and fed them into the fire.
There's enough fallen limbs in the forest to keep the fire going for a long time.
If you're driving down Butcher Road next summer and you see a glow from a campfire, drive on up our laneway and sit a spell by the fire.
You'll always be made welcome:)
﻿
Written by Jane at 8:02:00 PM